Learn to train horses in the most optimal and safe way in the aquatrainer.

Our aquatrainer courses have been developed out of necessity on the one hand and out of our huge passion for this unique rehabilitation and strength training equipment on the other. The widespread success being achieved with aquatraining is making it increasingly popular.

There is a downside to this popularity, however. For example, there are aquatrainers coming onto the market which are facilitating incorrect ways of moving, and horses are being trained ineptly, often due to ignorance. Horse welfare is a top priority for us. Which is also why Leen Soldaat developed a total concept a few years ago, one that entails owners of an iDots aquatrainer being given guidance by aquatrainer specialists who are also animal physiotherapists or vets.

This concept is paying dividends. In order to put a stop to the undesirable developments on the market, we deem it important to ensure that more people are given the right know-how through proper training. What’s more, research and experience are generating an ever greater body of knowledge, which we are keen to make accessible to everyone.

Consequently, we founded the iDots Aquatrainer Academy, where you can follow courses to develop all requisite knowledge and skills with regard to aquatraining, thus enabling you to train horses in the aquatrainer in an optimal way with maximum safety.

We hope to see you soon at the iDots Aquatrainer Academy! 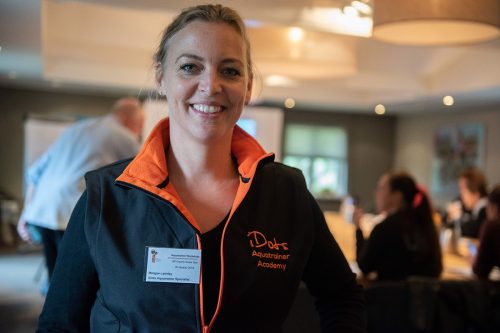 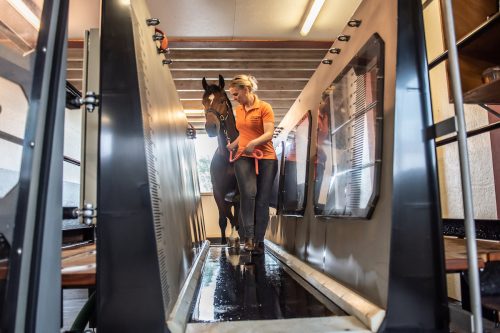 Aquatrainer Bootcamp
An Aquatrainer Boot Camp is available for those who have completed courses and/or training that overlaps with the topics we deal with in levels 1 and 2. This two-day, hands-on course covers all theory and practice from levels 1 and 2 specifically relating to the aquatrainer. All this knowledge will enable you to work properly and optimally with this unique training and rehabilitation equipment and to start achieving better results with your horse(s). Once you have passed the exam you will be allowed to call yourself an ‘Aquatrainer Supervisor’ and move on to level 3 (Aquatrainer Rehabilitation Supervisor).

Aquatrainer Bootcamp Pro
Bootcamp Pro will train you up to become an aquatrainer therapist and is specifically designed for vets and animal physiotherapists. In addition to knowledge of day-to-day training, you will learn how to set up and conduct rehabilitation programmes in complex cases.

You will learn how to set up and conduct rehabilitation programmes in complex cases.

Riders, trainers, grooms, stable managers, veterinary assistants, sports masseurs and anyone else keen to know more about the aquatrainer.

No previous training or specific prior knowledge is required for level 1. For levels 2 and 3 you will first need to complete level 1 and levels 1 and 2 respectively.

Dates and signing up

We will be starting with the Aquatrainer Bootcamp on November 17 &18 2022.

The teaching days for our 4th Webinar level 1&2 will start on March 2023. The practical days (3) are planned in May/June 2023. Data for level 3: will follow shortly

The price for the ‘live’ lessons is € 2.295 per level. The price includes teaching days, study material, lunch during practical days.

The Aquatrainer Boot Camp will be held at Hydro Horses in Doorn on November 17 &18.2022. The Boot Camp will enable you to progress to level 3 after passing the exam. This course can only be followed by participants with a solid, demonstrable knowledge vis-à-vis the topics dealt with in levels 1 and 2. This two-day, hands-on course runs from 09:00 to 16:00 each day and costs € 1.495 excl. VAT. This price includes teaching days, study material, lunches and exams.

The iDots Aquatrainer Academy is an initiative of Leen Soldaat and his team of Aquatrainer Specialists. Morgan is a fully qualified equine vet, equine chiropractor (FES) and dressage horsewoman. She runs her own business, Sport Horse Health Plan, the mission of which is to improve the health and welfare of sport horses based on science. SHHP combines many years of experience and expertise in veterinary medicine, chiropractic and top-level equestrian sport with the use of modern technical equipment such as the aquatrainer.

Leen Soldaat owns the Leen Soldaat Horse Training Systems, a household name in the equine sector. Before Leen dedicated himself to developing training equipment, he was active in equestrian sport for many years. Not only does he speak the language of horse people, then, but even more importantly he also thinks from the perspective of the horse’s needs. This is also the reason why his products are used throughout Europe for the day-to-day training and rehabilitation of horses.

In recent years he has been specializing in aquatrainers and everything associated with them. In conjunction with Morgan and animal physiotherapists Beatrijs Bunte and Evelyne van Mol, he developed a total concept to guide owners of an iDots aquatrainer, thereby providing them with the right knowledge and skills. Together, Morgan, Beatrijs and Evelyne make up the team of aquatrainer specialists.

Keen to receive further information on the training? If so, please feel free to drop us an e-mail. We will then get back to you by e-mail or by phone.